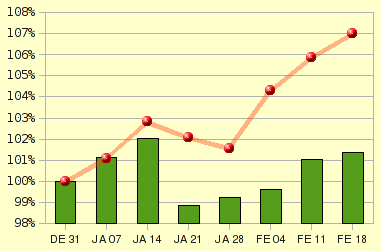 My stock-trading results were not so hot for this week: up only 0.3%, while SPY was up 1.1%.  The two main reasons seem to be ADTN (lost 0.4% just on that one stock) and the cooling down this week of stocks I've held since last week (especially ATML).  With certain notable exceptions such as ADTN and BAGL, the stocks I pick do seem to jump soon after I buy them, so I guess the problem remains that I hold them too long and their fire dies out before I sell.

Still, I’ve made 2.5% over the last four weeks (the green bars), which would be 32% per year!  SPY is up 4.8% (the red line) which would be 62%; obviously neither of these annualized figures is believable because the current rate of growth cannot be sustained.  I think it will end when the Fed stops their Quantitative Easing program (maybe in June).  My ups and downs don’t seem to be correlated with SPY’s, suggesting that my problems are poor execution rather than just the market’s fickle mood.  That’s good news if true because my execution can be improved but the market’s mood can’t.

I’ve been using this style of daily-progress table for a few weeks now, but I’m starting to lose enthusiasm for it.  It seems unable to answer important questions, like “How come I didn’t make much money this week?”  The purpose of focusing on gain-per-day figures is that “time is the enemy”, so a stock that gains 5% in a week is twice as good as one that gains 5% in two weeks.  But a stock that *loses* 5% over a week isn’t twice as bad as one that takes two weeks to do that: I still lose the 5% either way and spending more time on the loser means lost opportunity for gain on some new purchase.  So maybe %/day is like the P/E ratio in that it is meaningful only when positive.

The second table shows an alternate view of the data.  These are total gains since purchase, minus 0.04% for each day (including hold days and settlement days) so a score of "0.0" means the stock is on target to yield 10%/year.  If the price doesn’t change then this table will show a declining score because of the subtraction; if the price goes down then the score will go down even more.

Some of the numbers here don’t match up with the previous table.  For example, DRETF now shows higher historical closing prices than I actually saw on those days; maybe this is an exchange-rate issue?

As usual, grey indicates a hypothetical post-sale score.  A green half-bar means I sold half the shares; at that point the price of those shares is frozen while the other half continues to track the market price (there is also an increase in trading cost, which reduces gain slightly).  The green ¾ bar for ENTG means I sold another quarter of the shares, leaving only ¼ still tracking the market price.

The average is weighted by the sizes of the bets (GIII and MKL were half as big as the others).  I had a nice week, as far as realized gains are concerned!  The problem was unrealized losses: as shown in this table, many stocks held from last week were worth a lot less on Tuesday than they were last Friday. 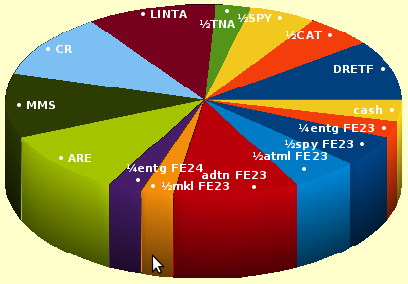 The new “2-for-1 strategy” (sell ½ the shares if price rises by ½ the initial stop depth) makes this pie chart of my current holdings look very busy!  The lowercase stock symbols have been sold and will rejoin cash on the date indicated.  I’ve decided that it doesn’t make much sense to use the 2-for-1 strategy a third time, leaving only ⅛ shares still held, so if the stock goes up by 150% of initial stop depth then I’ll sell the remaining quarter of the initial purchase.

GIII: My sell-stop was triggered by a $36.60 bid that no one took, causing me to get the lowest official price of the day which was $37.02.  This wasn’t so bad because I would have gotten even less if the stop were triggered the following day by an actual trade.

MKL: My $414.14 sell-stop was triggered by a bid no one took, causing my shares to get sold for $416.66 which was *below* the official low price of the day!  There is something fishy here.  Why didn’t my sale count for the day’s low?  Possibly because I sold very few shares of this very expensive stock.  After shaking me off, MKL proceeded to rise 0.7% that day.

ADTN: Gapped down at the open on Thursday, shaking me off, then proceeded to rise 2% that day!  On Wednesday I had thought up a new rule: if a stock falls to 50% of the initial stop depth, then sell half of it.  But ADTN’s closing price on Wednesday was a few pennies more than that cutoff so I didn’t sell.  As it turned out, the result would have been the same either way.

ATML: I would have made even more had I implemented the 2-for-1 rule earlier!

ENTG: I was unable to set Thursday’s pSAR value as the stop for Friday because Thursday's closing bid was lower than that.  In such cases, I can either keep the previous stop or sell at market price.  In this case, I decided to sell.  It went down after my sale!  Win!

TNA: It has risen enough for another partial sale, but it was a half-sized bet to begin with so I have put in a market order to sell all remaining shares.  This suggests that I will need a new rule: when should I buy TNA again to start another round?  Ditto for ATML, which has frequent run-ups and will likely have another one soon.

CAT and MMS: Both of these have risen enough for another sale, so I have put in sell orders for ¼ CAT and ½ MMS.

* * * * * I called Schwab to ask for “active trader” status, because that will allow me to use sell-stops that trigger on actual TRADE prices, not on hypothetical BID prices.  This should become effective on Tuesday.  I might also try using the “bracket” type of order to sell-stop if the price falls or sell-limit if the price rises.  But the demo of the active-trader system makes it look like bracket stops always use those stupid BID prices, which bit me twice this week.
Posted by Pyesetz the Dog at 2/18/2011 11:39:00 pm