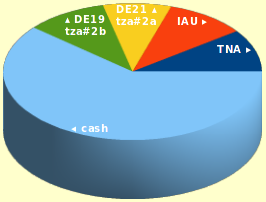 IAU: Bought because ZeroHedge recommends it.  They say to hold it for about two weeks.  Toby Connor also recommends gold (hold until it goes stratospheric), but he’s been wrong a lot recently, so I’ll stick to my usual 5½% trailing stop.  If I get only a 38% retrace of the recent drop, that would be a 2.5% profit.

Several times now I have missed trades because I have other things to do in life besides check the market every hour on the hour.  If I can manage to make some money next month, perhaps I should look into a way to automate the trades coming from my model, since it seems to be doing a better job than I am!  Unfortunately, Schwab doesn’t seem to support automated trading.  I found a news article suggesting that they sold their automatic-trading system to UBS.  It is difficult for me to leave Schwab because I have an IRA retirement account with them and am no longer a US resident.

TNA#0: Skipped this trade and avoided a significant loss.  Maybe my model should avoid buying TNA when PPO-signal is positive.  That wouldn’t help overall returns much, but it would avoid a bunch of loser trades.  I don’t need any more aggravation!

TNA: Normal swing trade in progress.  Bought in the aftermarket because I was in a business meeting at 2pm, but ended up getting roughly the same price anyway.

Last week I wrote: “The sell-limit order for a 38% retrace on that second tranche still hasn’t triggered. Now it’s a race to see whether the tranche sells before I get a ‘buy more’ signal from the model or get stopped out.”  Well, the race was won by the sell-limit order!

So I split the tranches of TZA#2 back into separate trades: the purchase of TZA#2a was eventually approved by my MACD model and so I sold it per model, while TZA#2b never did get approval and was sold at a Fibonacci retracement as shown on this chart.
Posted by Pyesetz the Dog at 12/16/2011 05:18:00 pm