SPY fell by 0.9% this week, while my account fell 1.2% to its lowest value ever, mainly due to last week’s big TNA loss coming home to roost after the unrealized TZA gain evaporated.  I am out of the market again.

This week, I withdrew some more money to put food on the table.  Because of its tranche limits, the current robot algorithm would never have invested that cash, anyway.  Now that I’ve withdrawn 20% of the money, it has become clear that there were some math problems in the weekly chart above (last week’s closing balance was actually -5.7%, not -6.1% as shown last week), so I have made a few adjustments to fix things up.  Unfortunately, it is too difficult to adjust the historical loss floor values so I just made some rough tweaks to make the chart look reasonably close.

The TZA trading model did an exceptionally bad job of surfing the recent oscillation.  From May 1st to May 9th the market dropped by 6%, but I lost a third of that before the robot realized that it was time to go short, and lost another third waiting for the robot to realize that it was time to close the position, so I got less than one third of the total available profit on that first tranche.  As has been the norm recently, the second tranche was completely mistimed and its loss mostly cancelled out the gain from the first tranche, so I ended up with nothing after subtracting the 0.3% transaction cost.

There were yet more problems with the robot this week:
Tuesday: at 10am, it adjusted the stop for TZA.  It was also supposed to buy SRTY at that hour, but inexplicably didn’t (with no error message), so at 11:30 I put in a limit order to buy for the 10am price, which was triggered at 11:50.  But SRTY got sold the next day for a loss so I guess I should just have skipped it.
Wednesday: The stop-update for TZA tried to change price on SRTY, got rejected by Schwab because stop-price above latest price.  Bug fixed.  Stops for TZA and SRTY updated manually.

At the beginning of this week, I altered the TZA trading model to reduce churn by avoiding trades where STDDEV is too high.  Since TNA is just a variant of the same model, I ended up adjusting that one also.  Here are the new rules, with yellow highlighting for changes:

This week, the new STDDEV requirement prevented the robot from buying another tranche of TZA at 11am on Tuesday, which would just have increased my loss. 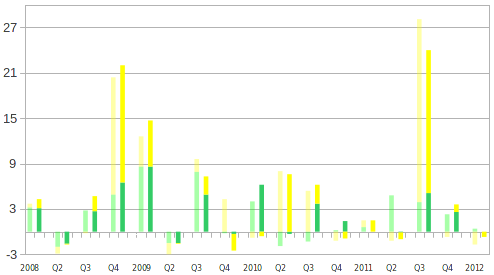 Here is a chart showing old and new quarterly results for TNA and TZA.  Note how little change there is, considering that there are now 20% fewer TNA trades and 34% fewer TZA trades!  Also note that Q2 was a bad quarter in three out of the last four years.

At the end of Q1, I said that this system hadn’t had two loser quarters in a row at any time in the last four years, so there was no excuse for that to happen now.  Since then I have further improved the system, so it has even less of an excuse to yield the worst performance in four years just after I start betting on it.

What should I do if Q2 ends up as another loser?  We are already halfway through and something is rotten in Denmark.  Perhaps I just don’t know how to use past performance to guarantee future results.  My back-tests say that this system should work, but it just doesn’t.  Maybe the problem is that 2012 is like 2007, which was before the beginning of my back-tests.  Maybe I should just shut the thing down and transfer this money to the mortgage account to reduce my debt.

Tim Knight said on Monday that he expects “a few days of a bounce and then Party Time USA”.  Are we done with the bounce?  Or will the pseudo-bankruptcy of JP Morgan Chase lead to the mother of all short-squeezes next week?