IAU: Doing great!  Already over halfway to the +0.8% gain level, when the trailing stop will take over and start raising the max-loss floor.

floor: Once again, the loss floor went briefly below -12% during the week, then popped back up by the weekend so I didn’t have to lower the bottom of the chart above.

OptionsXpress: Asked them how to apply for API access.  Reply: “At this time we are no longer providing access to our API.  The information regarding our API that is displayed on our website is currently in the process of being removed.”  I have cancelled my application to open an account with them.

InteractiveBrokers: These guys seem to be the only ones left still offering an API to retail customers in Canada.  Their gateway wants to run as a daemon and have the access password re-entered manually each time it starts, so not suitable for my current hosting service (I would need a virtual private server).  Haven’t called them yet.

SRTY: Another winner!  But it could have been better: on Wednesday, the robot did not get its “buy” order entered until 11:00:43am, by which time the market had moved significantly from the top of the hour.  On Friday, the 11am quote-fetch timed out, so the “sell” order was not entered.  I put in a market order two minutes later, but (as usual) a limit-order would have been successful — and it would have salvaged the +0.2% expected gain for this trade.

URTY: The “buy” order was entered late because the robot took so long entering the TZA order just before it.  I really need to investigate whether I can switch to InteractiveBrokers for faster quote-fetching.  As usual, it looks like the URTY model bought too soon.  I might have to sit on these shares for a week before the price starts moving upward. 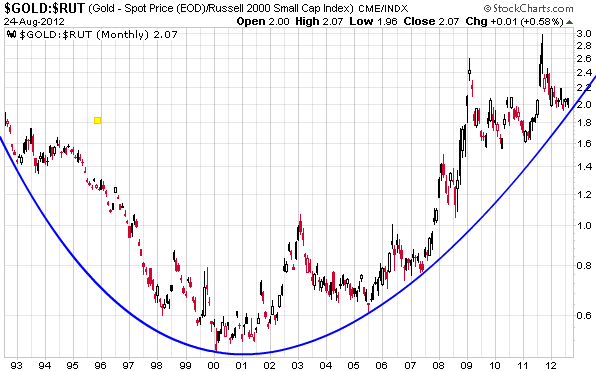 Here is a chart of the last 20 years, showing what happens if you buy gold and sell the Russell 2000.  The charts for S&P500 and Dow Jones Industrials look about the same.  The blue line shows a parabolic curve.  I expect that this trend will continue until the year 2015 or so, when “Kondratiev winter” ends.

As of today, this is the only long-term investment idea I have.  Buy gold, sell equities, wait.  It’s so simple!