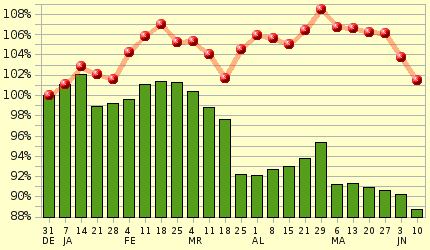 My account lost 1.7% for the week, while SPY lost 2.2%.  Half my loss comes from DRETF which went into correction this week and will hopefully come back.  Another ½% comes from BAL which stopped out and will not be coming back.

Trading performance over the last six months has been unacceptable.  I get mostly small losses interspersed with a few large losses and the occasional small gain.  I have been mostly losing ground ever since I started using protective stops, but I am not good enough at stock-picking to do without the stops.  I have called Schwab and asked for access to the options trading market, so I can use “puts” instead of “stops”, but this request will take over a week to be approved.  In the meantime, I don’t feel like buying anything.

IAU: Doing okay, but more and more pundits are predicting that gold has topped.  If all I get out of this is 2.9%, I will be disappointed.

DRETF: Doing very badly.  This is its worst week since the Flash Crash last May.  It took six weeks to get back to its old price after that.  If it drops another 5%, that will put it below the 200-day moving average, which hasn't happened since August '07; price recovery took 3½ years.  I might have to bail. 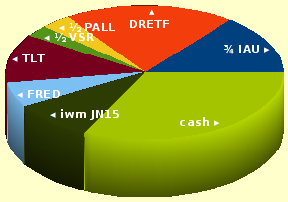 FRED: Showing relative strength (down less than the market).  I’m worried that the stop might not be deep enough.  This will be a good first candidate for a protective put.

Weekly scan:  Buy nothing.  There are no hits.

16-day oscillator:  Buy nothing.  The only hit this week was WTI on JN08, which I didn’t buy and it’s gone down since then.

TNA day trades:  $RUT was down 3.5% for the week, but I don’t feel like trying again this week.