SPY rose 1.1% this week, while my account fell once again, by 2.0%.  I am back to the account balance from six weeks ago.

The weekly PPO for IWM is now positive, for the first time since February — but not positive enough for a ”buy” signal.  Still, this is awfully bullish for my “market about to crash” thesis.  This week, the Japanese yen reached its highest value since WWII. 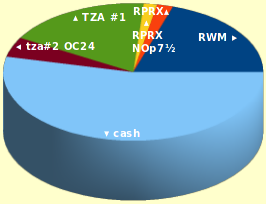 TZA: Bought a little early: PPO=-0.75.  Tuesday: got down to -10.0% with my stop at -10.5%!  Wednesday: tried buying more, with a tight stop, but stopped out within minutes, so shown above as #2 separate purchase.  Thursday: PPO finally hit -1.0 with a negative candlestick, so I bought more, just before the death of Ghaddafi was announced! 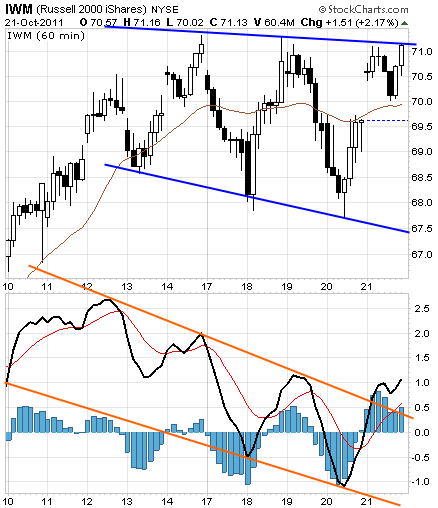 Here is a chart.  I don’t know what it means.  The stock prices show a “megaphone” pattern, which some people say is bullish and others say 50/50 can’t tell what it will do next.  The PPO waveform shows a ”descending wedge” pattern, which is probably bullish.  The breakout has already occurred.  How often do false breakouts happen on MACD-type waveforms?  Dunno.