SPY rose 3.7% this week, while my account fell once again, by 1.8%.  This is my second-lowest balance ever!

The weekly PPO is now strongly positive.  It looks like the crash is not going to be soon.  I need to switch my investments over to a ”bullish” stance.

Euro news: On Thursday, Europe’s leaders announced that Greek bonds will get a 50% haircut with no CDS payout.  The global market jumped!  Best case: this means CDS will now fade away because everyone knows the insurance will never pay out.  Some pundits think this was Europe’s version of the ”Bear Sterns moment” from 2008, when the US banking system went off a cliff but the authorities denied the obvious.  The market rose for the next three months, until the ”Lehman moment” when the obvious could no longer be denied and the market crashed. 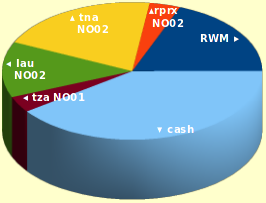 RWM: Should have sold this two weeks ago.  Sell on a dip next week.

TZA#1: Stopped out at Monday's open.

TNA#1: Whipsaw!  Market started to go up, then plummeted after I bought.

IAU: Bought on the after-hours market Tuesday night, upon Zero Hedge’s recommendation.  Sold on Friday because PPO had turned negative.  Gold *might* be going up a lot soon, depending on what the US dollar does next.  Still, a point for Zero Hedge: I made money on their stock tip.

TZA#3: Bought because PPO finally reached -1.0.  Then Europe announced their ”solution” to the insoluble debt problem!  According to my MACD-based trading system (see below), this should have been my biggest loss of the year.  Thankfully it was a small bet.

TNA#2: I wasn’t nimble.  I waited until noon to buy this, although my system said I should have bought at 11 AM.  In the meantime, the market rose a lot and I missed out on those gains.  Sold because PPO went negative.

me: I’ve been calculating these daily-change values incorrectly.  The final change for the week is only -1.8%, not -2.1% as shown. Fixed going forward for next week.

I have extended my market simulator program to handle inverse ETF’s.  (Previously I was just winging it by eyeing the charts.)

Note that my chart-eyeballing rule that required PPO < -1.0 was too strict.  The problems I've been having were not due to buying TZA too early, but because October has been a difficult month for my system.  Over the last year, this system would have had 13 gains and 9 losses, for a total of 102% gain!  For October there should have been one gain and two losses.

The big surprise here is the small trailing stop value of 4%.  I had thought that the RWM I bought in July should be held for months, but actually I should have bought MA29 and sold JN05 for a 3.6% gain, then bought AU07 and sold AU14 for a 6.4% gain.  As it is, I’ll be lucky to get a 1% gain on the original shares bought JL01.