Requiem for a drawdown 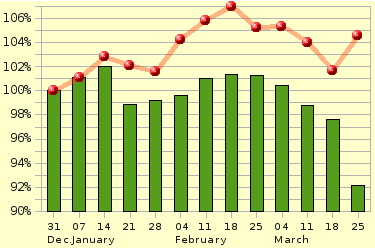 I lost 6% of my money this week.  Apparently this is referred to as a drawdown.  The standard treatment for drawdowns is “stop trading”: just do paper trades until things start working again.

The last 12 things I bought have all been losers (although IAU might come back soon).  20 of the 26 things I’ve sold since Feb. 22 were losers.  I do not know how to invest in a choppy sideways bear market.  I would actually have been better off just sitting in SPY even though it was declining.

The basic problem seems to be that I made too many bets that were all predicated on the same iffy investment thesis, because I liked the sound of it.  Although I am a “talking dog on the Internet”, I am an investment bear at heart, so theories that the market will soon drop a lot are overly attractive to me.
New rule: In my spreadsheet, at the bottom of the stop-loss column, show the expected account value if all stops trigger, rather than the percentage-change that clearly wasn’t scary enough. 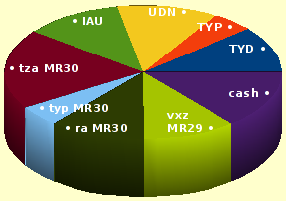 What a sea of negative gains!  I bought lots of highly volatile stocks that have large negative betas.  SPY went up, so all of those went down simultaneously.  I sold half of TYP which raised its effective stop floor, but not by much.  For the others, the stop depth didn’t change all week because I’m using weekly pSAR.

I bought RA because it was going up—it immediately stopped; then I sold it, so of course it went up afterward.

I bought IAU because it broke new highs.  It immediately pulled back, but traditionally gold stocks go up in the spring so this one might come back, especially if all the G8 currencies decline simultaneously, which might well happen.

Of the stocks I sold last week, only DRETF is worth more now than it was then, but it’s too difficult to do swing-trading on DRETF because it’s a foreign stock (no sell-stops, no online trades anymore).


Still being worked on.  Here’s what I have so far:

Use weekly pSAR as the stop price.  Keep until stopped out (about two months).  For SPY, this would have made 30% over the last three years, while just holding SPY for that time would have produced a 2% loss.


These also need more work: Buy tomorrow, use daily pSAR for stop, keep until stopped out (about 8 days).  If stock becomes eligible as a trend-trade while being held as a swing, lower the stop price to weekly pSAR and keep going.
Posted by Pyesetz the Dog at 3/28/2011 03:43:00 pm