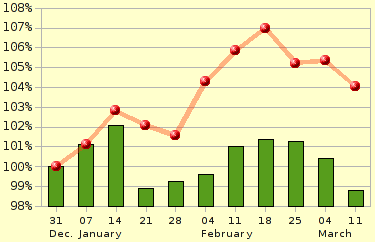 Another bad week.  My lowest balance of the year to date.  I lost 1.6% this week, while SPY lost 1.2%.  Officially, SPY’s +0.1% gain last week means that we are not yet in a bear market, but for practical purposes I think it is walking like a duck and quacking like one, too.  Obviously I do not yet have any skill in bear-market investing.

(See also the table below.)

DRETF: Released its earnings on FE 24; they were excellent.  Like clockwork, the stock price went up for 8 days, then went back down to maybe 3% more than before the earnings release.  Not a problem: I didn't buy this as a swing trade.

PROV: Released its earnings on JA 24.  Price fell JA 25, recovered JA 26, then jumped for five days.  Then six days of no movement, then seven days of slow uptrend.  Two days of correction, four days of uptrend.  Five more days of no movement and then finally downtrend.  This might be an Elliot Wave 1-2-3-4-5-a pattern, but I don’t quite see it.  The 10-day price channel suggests maybe 1-2-3-4-3-4-5 with the 2 and 4 being horizontal and a not yet visible.  If I had been paying attention to either the news or the price channel, I would have realized that it was too late to buy this again for the current cycle.  Once again we see about two weeks of strong uptrend after good earnings.

MTSC: Released earnings FE 03.  Price jumped FE 04, then a slow rise for five days.  Then the price jumped again FE 14, wobbled for four days, 2-day correction, 7 more days of uptrend, then down.  Another stock that I bought too late in its cycle.  Anyway, there were about 11 good days after earnings release.

BWC: This thing has been rising since October.  It might not be done yet, but my stop was too tight and I got thrown off.  At least I got to sell one quarter at a good price.

PCLN: Bought because indicators were positive, but now the chart suggests a rising wedge.  Perhaps I could buy it again to catch the last little uptrend before it heads downward, but I’m not feeling very lucky right now.

FARO: What an unlucky break!  My -4.2% stop experienced major “slippage” and ended up selling at -8.1%, which just about wiped out all those gains from CALD.  I suppose it serves me right, using a trade-stop on a NASDAQ stock (which Schwab warned me does not work well).  But at least my trigger price (and actual trade price) were within the official range of the day.  With bid-stops, I have twice gotten stopped out by a bid that officially never happened.  So I think I’ll stick with trade-stops for now.  Maybe I should treat “listed on NASDAQ” as a demerit when selecting a stock to buy?
FARO reported its earnings FE 23.  The stock rose and/or wobbled for 9 days, then fell.  Now the candlestick chart shows a piercing line, but I’m not buying it.

CBS: Rebought because I sold all my quarters last week for 6% gain and yet CBS still hadn’t fallen yet.  It’s been rising since December but the uptrend seems to be on hold for now.

SEMG: A new stock (issued last November), so still rather opaque.  Starting rising in January for no obvious reason.  The “new uptrend” I thought I was buying has apparently fizzled out.

HGSI: The only stock besides DRETF that I still own.  On Wednesday they announced that the FDA has approved their new medication for sale.  Thursday: stock jumped 13%.  I bought it on Friday, using a limit order to get it for 1% less than Thursday’s close and then giving it a 6.5% stop.  Its low for Friday was only 69¢ above my stop price.  I hope I still have this one on Monday.  Maybe it will consolidate for three days and then go up again.  Size is only 8% because that’s all the cash I had.

The thin green line for PROV is due to an oopsie.  I thought I had entered a conditional order: “If MTSC rises by 4% then sell ¼ of my MTSC shares at market price”.  But what I actually said was, “If MTSC rises then sell some of my *PROV* shares”.  Since MTSC shares cost 6× as much as PROV, the number of shares I entered was only ⅟₂₅ of my PROV holdings.  When I discovered this, I entered the MTSC trade manually, but the piddling PROV sale had already gone through.

The symbol pat indicates that I sold SEMG because of a bearish candlestick pattern (kicking).  This is supposed to be a “high reliability pattern” but was not confirmed on Friday—meanwhile I had already sold.

Where do I go from here? 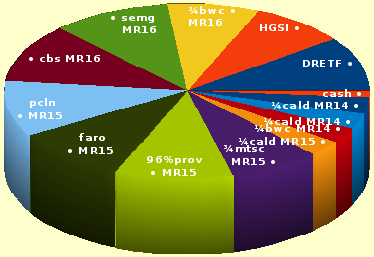 Only 18% of my account is invested right now.  There’ll be enough cash on Monday to buy something, but there seems to be nothing worth buying.

I looked around at ETF daily news for ideas.  They think VXZ might be good, but it fell on Friday, as did LTPZ.  Since I have declared a “bear market”, TZA seems like an obvious choice—but its pSAR stop is too shallow; I’ll wait until the price jumps out of its doldrums.

I found HGSI via AmericanBulls.  They also suggest GOK and PIR, but neither of these seems ready yet (PPO still negative).

This week I started keeping track of stocks sold last week, to see whether they should be rebought.  I had hopes for MMS, but its run ended.  I rebought CBS, but then its uptrend ended.  BND is up, but not really enough.

I guess I’ll let Monday’s money sit for a day.  On Tuesday there will be massive quantities of cash coming in, enough for about four purchases.  Hopefully there will be something to buy then.