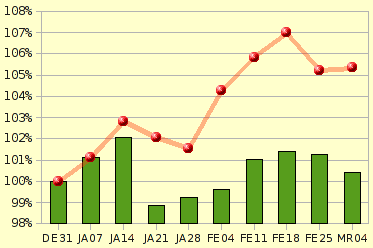 Another week where I had less money on Tuesday than at the start of the year, then things mostly picked up by Friday.  For the week, I lost 0.8%, while SPY eked out a 0.1% gain.

This week’s big problem was “the other shoe dropping” from last week.  CXO cratered, triggering my sell-stop on this huge bet.  Because of a snafu with Schwab’s StreetSmart.com system, only half the shares were sold; CXO later recovered and so my loss was reduced by the time PPO turned negative on Thursday.  Still, without CXO my realized gains would have been positive for the week.

Formatting changes this week: I’ve decided that subtracting 0.04%/day doesn’t help, because it makes the realized gains inexplicably larger than the last closing or stop price.  So now the table shows plain old percentage gains like everyone else uses.  The “size” column indicates the size of the bet.  My usual size is 11% of the account.  DRETF is a little smaller in order to have a round lot.  The pink half-bar indicates that half of CXO was stopped out on Monday, locking in my loss.  SPY is shown for comparison, but I didn’t own it this week.  Its “gain” figure assumes that I bought at last Friday’s close with no trading cost.

In the StreetSmart.com system, I can now specify a stop for a stock that I don’t yet own.  The notation new indicates that I placed an order to buy the stock, so a stop is specified but there is no closing price yet.

I have decided to switch from MACD to PPO.  Basically, PPO is MACD divided by share price, so it is more comparable between stocks.  The notation ppo indicates that PPO turned negative, so I entered an order to sell at market price the next day; in this case there is no stop because I’m selling regardless of price. 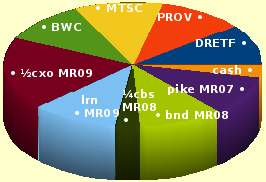 DRETF: Doing great!  I have no idea why.  Schwab now says this thing trades on “TSX”; previously they said “OTC”.  This may mean that they are now holding real D.UN shares on my behalf.

MMS: Shook me off, then rose.  PPO turned briefly negative; now it’s positive but only 0.02 and I have a rule not to buy at less than 0.1.  Still, I should recheck next week and consider buying this again.

PIKE: Sold it because PPO turned negative, suffering only half the loss I had been facing when I got up last Wednesday morning to see it already down 6% before I could apply a stop!  Slightly better than the 4% stop-loss I had originally planned to give it.

CXO: Released their earnings report last Thursday, which was a stinker.  Went up on Friday because everything did, then started sagging because of poor earnings.
New rule: Write down the next earnings date when buying a stock.  Don’t buy stocks that will release earnings within the next week.  If you’re still holding a stock when its Earnings Day arives, sell at the previous close.  For CXO this rule would have cut my loss in half (or prevented it entirely since earnings were so soon after purchase).

CBS: Ran out of quarters to sell!  PPO is still positive; recheck in a few days to see whether it should be bought again.

LRN: The uptrend ended so I didn’t get much.  Price never quite got high enough to sell some shares and lock in gains.

BND: I chuckled to myself while buying this: what does it say about the market’s mood that a bond fund is my best purchase?  It rose enough the first day to justify selling some, but I didn’t sell because it had risen only to break-even after trading costs.  Then it fell.
New rule: Don’t buy things whose stop depth is so shallow that the first profit exit has no profit.

PROV: Bought it again because it did well after throwing me off last time.
New rule: After the first day, use an automatic sell-limit to ensure that brief peaks above my strike price will get caught.  I think this rule will eventually catch some profits, but it wouldn’t have helped with PROV or LRN (which hit the peak its first day).

I discovered a new website today: AmericanBulls.com.  Despite its name, the site is neither bull nor bear.  Instead, it provides free candlestick-pattern analyses for all US and Canadian stocks!  $35/month to use their screener is a little steep, but the free service seems useful as a cross-check against other screeners.
Posted by Pyesetz the Dog at 3/05/2011 02:26:00 pm