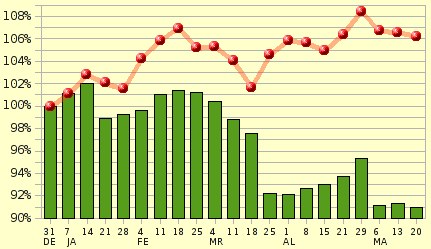 IAU: Doing well.  Just bounced off its 50-day average and will probably go higher.  For Monday: buy some more.  I can increase size to 18% of account without pushing my stop below water.

DRETF: Here we go again!  They are issuing yet more new shares on JN14 at last Friday’s price.  I expect that my gain will be stuck near 1% until then.  They had just released Q1 earnings, which were excellent yet again, so the stock should “pop” soon after June 14th.  For Monday: call Schwab to ask how long the trading ban will be; buy some more after that.

REX: Had to sell half of it to get the stop above water.

BPI: Had to sell half of what was left to get the stop above water.

PVH: Never got high enough to justify selling some.  Plummeted on Friday for no apparent reason.

SPY: Never got high enough to sell it.  I guess I’ll keep it for another two weeks or so, in case there is another rally.

PALL: Doing well, but it will be another month or so until the stop gain is positive.

ASG, HZO, FDM, and SBNY: All four initial tries of the 16-day oscillator are losers!  I think this was caused by last week’s rally in the US dollar.  The pundits warned me that the rally was coming, but I didn’t understand how significant it would be. 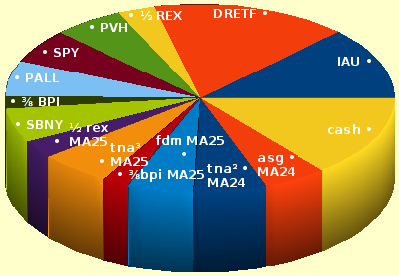 TNA¹: This initial try of the TNA predictor was a loser.

Weekly scan:  For the five original picks from AL04, the average gain is now -2.5%, while SPY has gained +0.4% during those seven weeks.  Not very impressive!  QTM did well and now BPI has an above-water stop.  I think the weekly-scanner needs to be retuned, perhaps next month.  I would like the *median* gain to be positive, so I can reasonably expect a gain from each purchase.  The current tuning is for maximizing the *average* gain, but I’m getting tired of all the losses and anyway the sell-by-quarters system drastically reduces the maximum possible gain.  For Monday: buy VSR.  Maybe sell it on MA27 before its “earnings fever” wears off.

Revised criteria, which are now pickier that the stock chart needs to show an 'M' shape and have decent volume: Using these criteria, SBNY would not have been selected on MA10.

New rule: If $USD closes above its six-day price channel, don’t buy anything the next day and sell any 16-day osc picks currently owned.  During the last four months, $USD closed above its price channel on FE11, MR10, MA05, MA06, MA11, and MA13.

This rule raises average gain from -0.3% to +0.8%.  Assuming that I buy only one pick for each day that has picks, and that pick has the average gain for the day, the expected gain is now +3.7% for an eight-day swing.

For Monday: sell SBNY and don’t buy anything.  There haven’t been any hits since MA09.

TNA prediction: The new pickier 16-day oscillator yields very few hits, so it is no longer effective for predicting when to buy TNA.

TNA day trades: Can’t figure out how to make these consistently profitable enough to cover their trading costs.