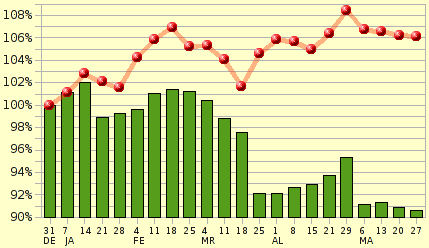 My account lost 0.3% for the week, while SPY lost 0.1%.  This is three weeks in a row of small losses for SPY.  I think this is yet another “failed bear” and the stock market will go up next week.  It might be relevant that $USD fell through the bottom of its price channel on Friday.

DRETF: Bought more on Thursday, for slightly less than in March so it didn’t affect the stop depth.  The buy was easy this time: the online purchase worked so I didn’t have to call Schwab.  But why no buy-ban while waiting for the new shares to issue on JN14?  Anyway, Friday was the ex-dividend day so I “bought the dividend”.  I haven’t decided whether to sell these new shares after the swing in late June.  If so I’ll split the purchase into DRETF¹ and DRETF² with separate gains.

REX and PVH: End of the first set of weekly-scan purchases.  Not impressive.  The weekly-scan needs retuning.

PALL: Sold ¼ on Thursday, so hopefully my wait for an above-water stop is now down to only another week or two.

BPI: Sold on bad news: the State of New York has begun investigating BPI for fraud, which is exactly what I was afraid of when I bought it.  Meanwhile, less-fussy traders have bid the price back up.

SBNY: End of the first set of 16-day oscillator picks.  Not impressive. 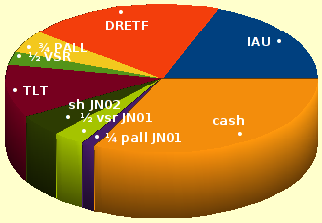 VSR: A weekly-scan pick bought as an earnings-swing trade.  But the earnings swing didn’t really happen because trading volume dropped off to almost nothing — six trades per day!  I would prefer to see at least a dozen so price discovery will actually work.  The order book for VSR usually shows multiple bids but no asks; no one is willing to sell this stock.  On Thursday I put out a limit order to sell ½ at $3.43.  A few hours later someone bought it, so I personally pushed up the price of this stock by 2%!  But five minutes later some joker sold at $3.37 and wiped out my effect.  I have an order to sell the other ½ at $3.50 but no takers yet.  Meanwhile, this standing limit order blocks my standing stop order, so I have to watch this stock and manually decide when to bail.
New rule: require a minimum volume of 20,000 shares per day.  18,000 is not enough!

SPY, TNA, and SH: The market seemed oversold on Monday, so I thought it would probably bounce back on Tuesday or maybe continue downward into the bear market.  So I put in orders to buy TNA if it rose 1% and SH if it rose ⅓%.  They both triggered!  TNA went up only 2% before falling back down, so I lost 1.5% with trading costs; SH rose just enough to cover my costs.  Then SPY rose for the rest of the week, so SH (which is its inverse) fell.  I got rid of SH on Friday as part of my new thesis that the market will rise next week.  From its low MA20 to its high MA23 to its low MA24 was a textbook 62% Fibonacci retracement, but then the expected upswing didn’t happen.

TLT: It’s unclear which will pop first: the gold bubble or the bond bubble.  So I bought some bonds in case gold pops first and all the scaredy-cat money runs over to bonds.  My account is now 20% gold, 20% Canadian real estate, and 10% US govt bonds.  I’m loaded for bear!  For now I have TLT on a 3% trailing stop.  If I still own it in mid-June, could lower stop to weekly pSAR(0.10) — because 0.16 is too high — and keep until Labour Day for an expected gain of about 5%, based on how the last few years have gone.

Weekly scan:  Buy nothing on Tuesday.  None of the picks are appealing.  Mostly they are companies that just released good earnings and have already jumped.

16-day oscillator:  Buy nothing on Tuesday.  There were no hits this week.

I might have something!  It’s based on the rather-obvious idea that a good week is often followed by a bad Monday and vice versa, and also on $RUT: the Russell 2000 small-cap index.  If $RUT falls by at least 1% from last Friday to this Friday, then buy TNA next Monday, with 2% trailing stop, and sell at 3:30PM if not stopped out.  If $RUT rises by at least ⅓% then buy TZA instead.  Otherwise, buy nothing.  Results so far this year, assuming for costs that the trade size is 6% of account: 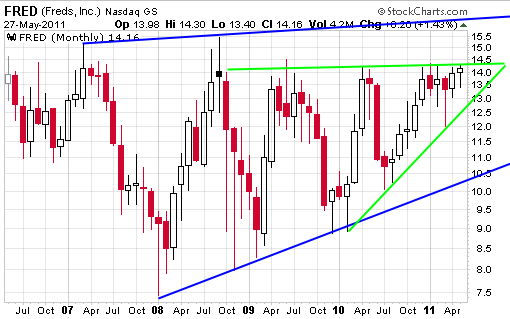 So I think the market will fall on Monday but rise overall for next week.  This suggests that I should buy some stock, but my usual stock-picking methods are coming up dry.  I looked at the earnings calendar to find companies that have just released good earnings but hadn’t jumped already.  The most appealing candidates are SDRL and FRED.

Fred’s is a general store/pharmacy chain in the southeastern US.  Take a gander at this stock chart, which shows the last four years for FRED.  It’s a giant triangle!  And it looks like it’s about to pop.  If I can buy it at $14.16 with an 8% stop, that would be a stop price of $13.03 which was its low for last month.  Based on this chart, I think I’ll give it a 9% stop which will give it room to bounce off the green slanted line one more time.

Seadrill is a Norwegian deepsea oil-drilling company.  It just bounced off its 200-day moving average, so the outlook is positive.  Weekly pSAR calls for 11% stop depth, which is right at the 200-day average.