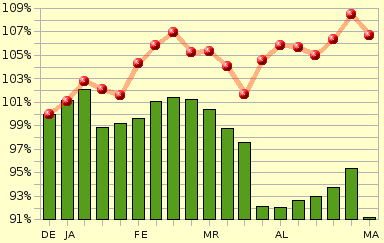 The big news this week is the success of the weekly-scan and failure of the daily-scan systems.  Except for TS, which was the weakest of the bunch, everything with a weekly-pSAR stop was retained (and hopefully will now go back up with the next market oscillation) while everything that had some other kind of stop got sold and will not be coming back.

Also successful was the sell-by-quarters system.  I was happiest with the performance of the stocks for which I had already sold some quarters.

Since there might be a “washout” downspike on Monday beore things head back up (if indeed they’re going back up), I have decided to postpone the weekly raising-of-the-stops until Monday night.

UDN: I read a news article saying that “the train has left the station” regarding the US dollar’s rally and that “short-sellers were hurting”.  So I sold for a profit, which isn’t “hurting”.

IAU: Some pundit scared me with a chart of $GOLD showing a “likely support price” for the bottom of the cycle—which was below my stop price!  So I lowered my stop, but IAU gapped up on Friday so this wasn’t needed after all. 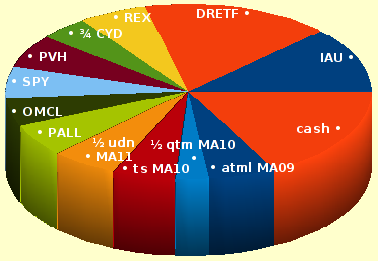 ATML: 8% trailing stop was not enough.  Should have used 12%.  Probably should buy this back.

BZ: Released its earnings Monday, which were only so-so.  Hopefully I got the big dividend (as reflected in gain figures above).  When Google told me the ex-div date was Monday, I raised my stop to +0.5%.  But then BZ started tanking so I lowered it.  Wrong move!  This one was almost a winner.

OMCL: Another weekly-scan pick from the AL04 group.  It has done reasonably well over the last month while I didn’t own it.

PALL: Palladium has been lagging for a while.  Hopefully it has just hit bottom and will now go up.

Daily scan, rev 1:  Does not work!  I tried DUG, JBHT, KBALB, CAS, BZ, and APA.  All were losers.  I’m going to stop using this thing until it can be retuned for better results.

Daily scan, rev 2:  I have invented a new daily scan.  It looks for stocks that are exhibiting a 16-day oscillation and are just off their nadirs.  Buy at next day’s open, 5% hard stop, sell at the open 8 days after that.  This seems to work remarkably well over the last 60 trading days: Note the big gaps: there were only 14 days with any hits, and no hits for MR24 through AL06, and again no hits from AL15 through MA04.  There seems to be a deeper pattern here that I’m not seeing, but what I do see is an average gain of +2.5%, with 27 gainers out of 34 tries.  There are 10 gainer-days out of 14 days-with-hits, so when there are hits today and I decide to buy them, I’ve got a 70% chance that tomorrow will turn out to have been a good day to buy.

For Monday: buy ASG and HZO.  Profits, here I come!