My account rose 0.3% this week, while SPY crashed 7.2%.  All in all, not a bad week.  I was nimble and quickly rearranged my portfolio on Friday when the market failed to bounce as expected on Thursday.

US politics: Republicans and Democrats came to agreement and passed a bill on Monday to increase the deficit ceiling.  Unfortunately, what they both agreed on was that the bill sucked (though they disagreed on which were the sucky parts).  Obama did not get the token tax increase on the rich, nor the right to ignore the issue for a whole year.  The government will reduce spending during a depression, which will of course crash the economy.  It’s June 1937 all over again!

Business news: Many companies reported good earnings this week, but no one believes anymore that future earnings will be as good as these.  The market is in full panic mode!

I didn’t feel like fixing the “daily progress” table this week, so it still has all the problems identified last week.

DRETF: Abandon ship!  Things seemed to be going okay.  I bought more on Thursday (note the green bar is slightly shorter) because it looked cheap.  But then the market tanked and took DRETF with it, piercing the 200-day moving average.  Sold all at Friday’s open, which luckily was a 1% gap-up for the broad US market, but not for DRETF. 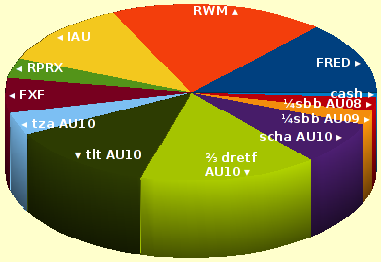 TLT: Dividend recognized on Monday.  Sold the puts on Thursday.  Got rid of it on Friday because it went down even though stocks were going down so bonds should have been going up.  I got more than the 5% profit I had been hoping for when I bought it!

FRED: I’ve lost interest in FRED.  The lovely chart pattern that induced me to buy it has been ruined by the market crash.  Didn’t sell it on Friday because its put is already maxed out (shown by red underline) and so it can’t hurt me anymore.  On Monday, the shares+puts were worth slightly more together (-2.1%) than apart (-2.5%), hence the red underline even though the daily gain is above the loss floor.  If I can catch the bottom, maybe sell the puts for a huge gain and then ride the stock back up for two weeks, selling for a small loss?

RWM: At purchase I had intended to sell half when the price increased by 6.5%, which happened on Tuesday.  Bought lots more on Friday to rebalance the portfolio towards bearishness, because of the ongoing crash.  After Friday’s close, decided to switch to a 4.5% trailing stop so my minimum gain will be positive even if next Monday goes against me.  If RWM goes up another 1% or so, it looks like I can afford to buy a two-week put without pushing my minimum gain into negative territory.  Puts are much nicer than stops!

SCHA: Wednesday looked like such a cute little bottom that I sort of wanted to spank it!  So I bought some SCHA.  Then Thursday was even lower so I bought some more.  Dumped it at Friday’s open because the market is crashing.  Buy it back at the real bottom.

RPRX: Same as FRED.  Maybe sell puts at bottom and ride shares back up.

FXF: Doing great!  Am using a 3% trailing stop, because this thing hasn’t dropped even 3% from its peaks since May.  Tuesday was the last big uptick before the Swiss government intervened with some sales of newly-minted francs, trying to drive the price down.  And *still* it rises!

TZA: Tried to increase profits during the crash, but I bought this just before a mini-reversal.