SPY rose 4.7% this week, while my account fell 3.1% to its lowest level ever!  It seems the “counter­balancing” method does not work.  I buy SCHA when it is going up and sell when it is going down, so I am “buying high, selling low”.  The deleterious effects of these maneuvers were masked by the parabolic rise in IAU, but now that gold has gone into correction these losses have become visible.

RWM: Doing okay, but I can’t decide how much of it I want to own.  Sold 9% of account on Wednesday, bought 4% on Thursday.  The news from Europe is still awful so I want to have a lot of RWM on hand for the next Big Drop.

IAU: On Tuesday I sold the put, bought more shares, and put them on a 5½% trailing stop to prepare for the ”blow-off top” that might be coming.  But on Wednesday the trailing stop was about to trigger so I turned it off and tried to sell manually for more money.  Bad move!  Lost virtually all the profits.
What’s next for gold?  It will either do a ”dead-cat bounce” followed by a drop down to maybe $1600/oz, or it will do yet another ”head-fake correction” and immediately start upward again.

RPRX: I do not understand why the bid prices on the puts are so ridiculously low and have been all week. 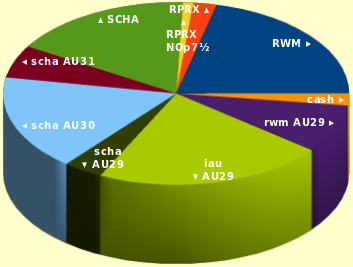 SCHA#6: Bought a big block on Monday.  Then the price started going down, so I wanted to put it on a 3% trailing stop.  But somehow I miskeyed the order: instead of “3% below current price” it went in as ”3% below purchase price” and the sell order triggered immediately, losing 0.7% of my account balance in one bumbling move!  Then SCHA proceeded to go up a lot, adding insult to injury.

SCHA#7: More attempts to get my timing right, buying and selling all week.  Finally got it right on Friday: bought low, sold some at a higher price, kept the rest for the weekend.

DRETF: Had a very nice day on Tuesday.  Is now above its 50-day moving average.  Might consider buying it again.