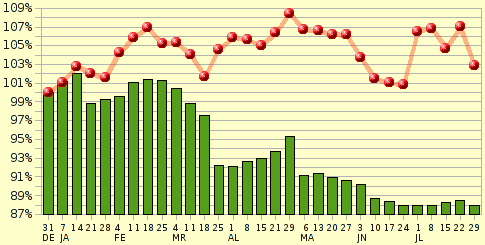 My account fell 0.6% this week, while SPY fell 3.9%.  My account balance is the same as it was a month ago!  I am not happy with DRETF right now.

US politics: The artificial deficit deadline grows near.  The Establishment (elephants and donkeys) have proclaimed victory, but they need to peel off some Tea Party and some Progressive Caucus votes.  It seems quite possible that the proclamation will turn out to have been premature.

My “Daily progress” table below is getting overcomplicated.  It doesn’t handle options very well.  I have been avoiding mixing options with different expiry dates, or having fewer options that only partiallly cover my shares, because the table format can’t handle that (rather than because those would be bad investment moves).  Something needs to be done to prevent this table from cramping my investment style, but I’m not sure yet just what.

DRETF: Argh!  Last week’s press release was deliberately misleading.  Now I read that “there was no suprise” that of course Dundee would have to issue more shares to pay for their new purchases, even though their press release said they would just sell some existing holdings and previous releases have mentioned stock-issues.  Now DRETF’s share price won’t be going anywhere for a month, and it hasn’t really gone anywhere since March.  I sold ⅖ of my holdings just as the price was gapping down, for a measly 0.53% profit.  Hopefully I got the dividend just before the sale. 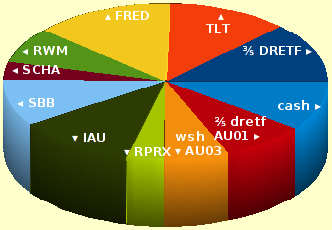 TLT: I do not understand option pricing well enough.  TLT is up 2% since I bought it, which would have been 1.8% gain after transaction cost, but I show a gain of only 0.5% because the put has lost so much value.  Once again the problem seems to be that I am not taking enough risk.  Maybe I should have bough a lower put that would have worsened my max-loss but wouldn’t decline in value so much?

FRED: My buy order finally triggered on Thursday!  And FRED went up on Friday so it looks like I chose a good time to buy shares.  Problem: the automated purchase of the puts once again did not go through.  I called Schwab for the third time and this time I think I got the right answer: they do not support shares+puts purchases for people with only level-0 options privileges.  So I bought the put (August $12.50) on Friday.  This is a very short-duration put, which will turn out to have been a good idea if FRED shoots up over the next few weeks.  But really I bought it to avoid making the above table too complicated, which is a bad reason.
Because share+put automated transactions will not be available to me until at least December, I will have to rethink how to sell stuff.  I have to sell the put manually before I sell the shares automatically, which means I have to decide when to sell it.

RWM: Getting close now.  I sold the puts on Friday to prepare for maybe selling the shares next week.  In the meantime, RWM is hedged by SCHA so really I don’t need any puts.  RWM is up 4.3% from when I bought it but my “daily gain” shows a loss due to the decline in the value of the put.

UUP: I hate stops!  Hates them, I say.  UUP gapped down on Tuesday, whacked my stop, then went back up.  Anyway this trade hasn’t been going my way all along.

SCHA: Bought more on Wednesday because it was a 63% retracement of the recent run-up.  Hopefully I can catch the bottom and buy more for the next upswing.

WSH: I hate stops!  Looked bad on Wednesday, so I raised my stop to ensure profit.  Then it gapped down at the open on Friday, triggering my stop, then went right back up.  Maybe buy it back next week?

IAU: The July dip didn’t happen.  Instead, gold has been rising due to Euro and US default fears.  George Maniere said “Under no circumstances should you open a position in gold here”, so I did—because it cannot possibly be true that there are no circumstances that suggest a gold position right now, so I think George is trying to convince himself rather than stating an objective analysis.  Traders need to be contrarians: if the US defaults, the price of gold will spike.  Bought more on Wednesday, for about the same price.

RPRX: My low bid for the shares was accepted.  Waited for the price to rise later in the day and then got a good deal on the put.  Stock ends the day higher.  So far, so good!  Then it plummets.  This could be bad for a month.  Oh well.

FXF: The Swiss franc is going up, for much the same reasons as gold, but it’s going up much faster.  Buy on Monday?