SPY fell by 6.6% this week, while my account rose 5.3% to its highest value in a month.  This was accomplished via a hefty bet on TZA and a considerable quantity of luck.

Euro news: The words ”inevitable” and ”default” are starting to be uttered by European leaders.  Things look grim.

US news: On Wednesday, the Fed announced that they would not print more money to prop up the stock market, which immediately tanked.  Adding insult to injury, the Republicans decided to start threatening to shut down the government again.  One has to wonder whether the Republican Party would behave any differently if it were being secretly controlled by foreign enemies of the USA.  Of course, sometimes the Democrats seem like that also, but less often.
There were protests on Wall St that were treated as riots.  Protesters were beaten.  Live-feed cameras showed police breaking their own rules of engagement.  Perhaps the food riots will begin next year.

In this week’s daily-progress table, the entries for Monday are missing.  I didn’t feel like writing them down because last week was so depressing, although actually Monday was a slight improvement over Friday. 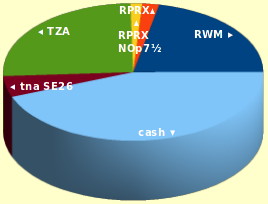 TZA: On Wednesday I was watching the market as the Fed made their announcement.  Volume picked up immediately!  There was a momentary up-tick, followed by a sustained down-tick, so I bought more TZA.  Big win!  On Thursday I was greedy and bought more, but it didn’t help.
I have installed a 15% trailing stop on TZA, although 12% would have been sufficient to ride the August crash all the way down.

TNA: Oopsie!  In the excitement of the post-Fed rush, I entered my order for the wrong stock!  I realized my mistake a minute later and managed to get out of it with approximately zero loss (just trading costs).

SCHA: Got a ”buy” signal on Friday, but once again I didn’t follow my own rules.  If the market goes up on Monday, I should buy it to counteract the expected losses from TZA.  This will create difficulties because I have a lot of driving to do on Tuesday and can’t watch the market to check for a ”sell” signal.  But the market doesn’t care about my personal life.