SPY fell 0.1% this week, while my account fell 1.2% to its lowest level ever!  Once again the “relief rally” is cancelled.  I bet that gold would go down, but it went up.  I bet that DRETF and TNA would go up, but they went down.  I need a more reliable trading paradigm.  See MACD-based trades below.

Euro news: Next Wednesday, the Constitutional Court of Germany will rule on whether it is permissible for Germany+France to bail out Greece, given that the Lisbon treaty says ”countries may not assume other countries’ debts”.  If they say no, the Euro is dead. 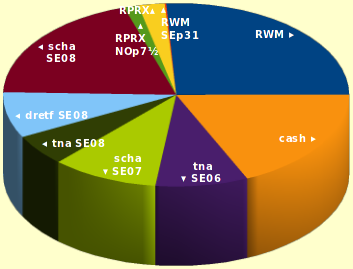 RWM: On Monday the shares I sold last week were settled.  Bought more on Friday to prepare for the Big Drop if it happens this weekend.
On Tuesday I bought another put, since I had expected a relief rally.  Looks like the put will expire worthless at the end of next week.  It is the nearly-invisible red line on the pie chart.

SCHA: Bought more Monday and Tuesday.  Previously-sold shares settled Tuesday and Wednesday.  Sold more on Thursday.  Sold all on Friday.  I need a better system for deciding when to buy and sell!

DGZ: I thought gold would go down, but it went up.

DRETF: I thought real estate would go up, but it went down.

TNA: Tried to catch the bottom on Wednesday, but missed on the first try.  Sold and bought some more at lower price.  Went down again.

Over the past year, on and off, I have been trying to figure out how to use MACD to get reliable profits.  I might finally have something!

Basic rules: Here are simulated results for last 12 months.  The “profit” is expressed as a fraction of the block size.

The ”weekly” rule says I should have bought at the open on October 3, 2010 and sold at the open on May 22, 2011 for a 22% profit!  At no time during those seven months did SCHA’s price ever fall more than 8% below its peak so far.  A nice, effective rule—but very rarely active. Over the last three years it would have triggered only five times, with four wins and one loss for an overall gain of 27%, during a period when the market lost 9%.  It says (and I think it is correct) that I should not own SCHA right now.

The ”daily” rule is apparently the most popular among traders, but it seems to have the most problems.  Its overall profit score is the lowest.  It requires that I buy and sell precisely at 4 PM (profits would be even lower if I used the next day’s opening price).  Worst of all, it says I should own SCHA as of today!  I don’t think so.  Perhaps I should just not use the daily rule.

The ”hourly” rule has seven times as much data to work with as the daily rule, so it does a better job.  It says I should have bought SCHA on August 26th at 1PM and sold August 31st at 12PM (5.5% gain) and not own any right now, which seems right. The main problem with the hourly rule is that it requires me to check the market every hour on the hour, all day every day.  Since this is unrealistic, I have adjusted the simulation to assume that I will not buy/sell based on the PPO for the first hour of each day (before I get out of bed) or the last hour of the day (requires sniping that 4PM price).  Oddly enough, skipping those hours improves profit slightly!  Other hours will have to be skipped because it’s just too inconvenient to check the market every hour of every day.  I am not sure yet how much profit will be lost that way.

If this thing actually works with SCHA, the next move would be to apply it to TNA, which tracks the same ups and downs as IWM but leveraged 3× (before fees).  Here are some comparative gain charts: Looks great!  The problem is that if I screw up and get losses when the simulation says I should have had gains, the losses will be tripled.  I think I’ll stick with SCHA until this system proves itself.
Posted by Pyesetz the Dog at 9/06/2011 08:05:00 pm