SPY fell by 0.3% this week, while my account rose 1.6% to its highest value in six weeks.  I am very pleased with this result, especially since this was a week of travel for me so I couldn’t sit around all day watching the market.

This week was the end of the third quarter of 2011 (and the last quarter of many fiscal years), so professional traders were motivated to trade stock amongst themselves at artificially-inflated prices to make their final books look better.  Yet the market fell anyway!  I expect that SPY will fall even more next week and perhaps quite a bit the week after that.

Euro news: The deputy prime minister of Greece said his people are tapped out and cannot raise taxes any further.  A Hungarian bankster working at an Italian bank said that the Greek default is only days away and the Euro is “practically dead”.

US news: Mainstream media outlets are starting to cover the protests on Wall St.  The focus of protest is morphing from “bankster greed” to “police brutality”.  Some people are calling it the American Spring (in comparison with Arab Spring), while others are comparing it to the race riots in the 60’s when police aimed firehoses at black children on live TV. 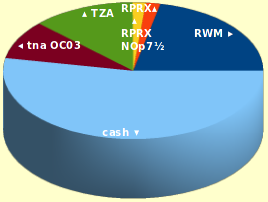 RWM: Doing okay.  I am glad to say I am still holding some of these shares since July 1st, but allocating 20% of my account to this unleveraged holding means my maximum gain from the (imminent?) crash will be only about 2.5× the market’s loss, rather than the 3.0× I could get if I went all-in with TZA.  Still, I think I’ll keep it until November as it gives my account a bearish bias even on days when I’m not holding TZA.  The gains shown above are only half what they could be because I bought more shares and then sold them, so only 50% of total purchased shares are still live and affecting the gain.

RPRX: Not going anywhere.  Once again the put-option has red underlines every day, indicating that it is underpriced and I could get more from exercising the option than from selling the shares & option separately.  This time the problem steps from end-of-quarter manipulation; last time it was Options Expiration Week manipulations.  What they have in common is that the Big Boys are motivated to artifically inflate prices for one week.  Hopefully things will settle down next week.  I guess I’ll wait until after the crash before selling.

TZA: Sold on Monday and bought back on Thursday, which helped to reduce anxiety during my road trip, but now I have only half as many shares and my gain is 1% lower than it could have been.  The trailing stop would have triggered on Tuesday at +0.9% but I sold Monday for lots more than that!  If next Monday is a bad day for the market then I should buy some more.

TNA: The oopsie from last week settled on Monday, which happened to be the same day I bought it back (deliberately this time).  Sold on Wednesday because PPO went negative.  Win!  I made lots of money on both TNA and TZA the same week, buying and selling them alternately.  That’s the way to do it!  Money for nothing and your cheque’s for free.