Euro news: The prime minister of Greece decided to hold a referendum on whether to accept the EU bailout.  He was summoned to the G20 meeting in Cannes and told the following: (1) No referendum allowed, because “yes” is the only permitted answer; (2) No election allowed, because Greece can’t afford it and the EU won’t pay for it; (3) Do exactly as we say or the spigot of bailout money gets turned off immediately.  I am left wondering how long it will be before the Greek government collapses and then Germany sends in troops to prevent anarchy—and perhaps also to install some overseers to help the Greek serfs “put their minds to working” for their new masters. 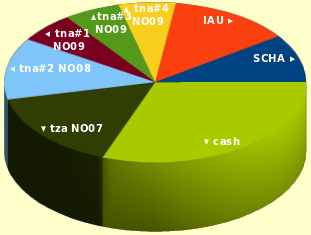 RPRX: There’s something wrong with this math.  The put-option prices were not actually as ridiculous as shown here.  Anyway, it looks like I’ll be discontinuing the use of options for the time being.

IAU: Re-bought on Thursday because this week’s price chart for gold looks very strong.  Bought more ”at the dip” on Friday.  My basic plan for the moment is to stick with the -2.0% fixed stop until the price rises to +3.5%, then switch to a 5.5% trailing stop. That should be good for the long haul since gold never drops 5.5% from its peak unless it’s continuing down for a while, as happened on SE 15.

RWM: Sold because last week’s revised calculations indicated that I shouldn’t hold this long-term.  On Sunday, I put in a sell-limit order to sell at a 38% retrace (from the OC 27 low up to the double-top on OC 18 and OC 20).  That order triggered at 9:35am on Monday!  Instead, I should have used a retrace back to the double-top on OC 06/07, which would have triggered on Tuesday.  Oh well; I’m not sure how I could have known that.

SCHA: Opposite of RWM.  On Sunday, I put in a buy-limit order that triggered Monday morning at 9:35am.  As of Friday, the weekly PPO is still positive, so keep this for another week.

TNA#2, TNA#3, and TNA#4: These were day trades.  I look for a period of consolidation, followed by a sudden uptick in the 1-minute MACD(10,30,20) indicator.  Still not sure how to set the stop price.  For TNA#2 I bought at two times on Thursday, then sold both at the close.  For TNA#3 the trade stopped out after five minutes; for TNA#4 it stopped out after 20 minutes.  I could get roughly the same results by betting 2‒3 times as much money on SCHA instead of TNA, which would avoid the transaction fee but require committing more capital for three days until the trade settles.

TZA: Was out shopping and couldn’t sell at 2pm—this would have made a big difference!  The market fell a lot just before Monday’s close, so I bought some more after-hours.  This would have been a good move if I had sold at the proper time.

TNA#1: Didn’t buy at 1pm because TZA not sold yet; was out shopping at 2pm & 3pm.  Not sure why I sold early, but that didn’t make much difference.