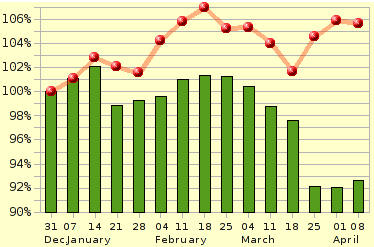 I decided not to buy CZM (which did well) because it's a Chinese stock like CYD (which did okay) and I didn’t want to be “overweighted on China”.  So instead I bought PVH which did badly.  Overall, 3 of the 5 initial purchases using the weekly scanner had gains in their first week and none of them stopped out, which was better than expected.

For a sample of 100 stocks over the last three years, the weekly scan’s average result is a gain of 4.6% over 5 weeks (so maybe 40% per year), while the daily scan’s average is 1.8% gain in 6 days (plus 3 days' settlement time, so maybe 50% per year, assuming as usual that volatility cancels out compounding). 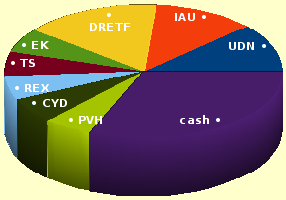 UDN: This thing moves very slowly.  Some pundits think it might jump 6% soon, but it’s gone up only 8% over the last year.  I’ve put in a limit order to sell ¼ of it if it goes up another 0.6%.  I need more spare cash to buy weekly-scan and daily-scan picks!

IAU: Finally went up.  At this rate, it will be another three weeks before my stop is above water.  I’m still seeing lots of pundits saying that it will rise 40% over the next three months, plus a few who think it will have a correction first.

There are lots of hits this week!  Likely candidates: COPX, QTM, PBY, CIS.  Of these, QTM has highest PPO and lowest price compared to SMA.  PBY has the next-best PPO but CIS has the next-best price.  Decision: buy QTM at Monday's open.


I ended up taking the no-brainer approach: the daily scanner uses the same program code as the weekly scanner, but with different parameters: It’s interesting how similar many of these values are to the weekly scan.

Many days have lots of hits with these parameters, but not today!  The scan finds only AER, which just had a big jump and might fall back on Monday.  Reducing the min-PPO criterion finds HGR, which might be good.  Decision: buy nothing; recheck Monday night.  I don’t have enough open portfolio slots to buy a daily-scan every day, so I shouldn’t waste a slot on a marginal candidate.