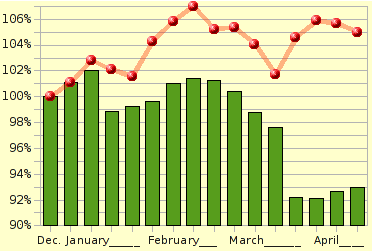 The five “weekly” stocks bought two weeks ago still aren’t going anywhere.  The weekly that was bought a week ago has done very well but is obviously atypical.  The US dollar held steady while gold continued upward.  DRETF seems to be in a broadening-wedge pattern.

Once again there were no realized gains this week. 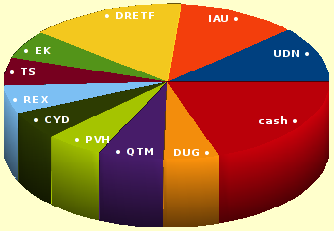 QTM: A weekly-scan pick that has done uncommonly well.  I tried a fancy move that once again didn’t work: On Thursday night I changed QTM from a hard -8% stop to a trailing 11% (because there have been days recently when QTM dropped by 10% but was still worth keeping).  Also I put in an order to sell ¼ with a limit of 15% gain.  Results: QTM gapped down at the open, so my 11% stop turned into 14%.  Also my limit never fired.  I’ve put in a market order for Monday to sell ¼ at around 10% but really I should update my analysis program to see whether this is still a good idea.  It might be that *either* a trailing stop *or* selling a quarter are good ideas, but not both.

DUG: Daily-scan pick that hasn’t done well so far.  Goldman Sachs and Saudi Arabia think the price of oil should go down, while Bank of America thinks it should go up.  All of these entities are manipulating the price of oil, which relates vaguely to the prices of oil-company stocks that DUG bets will go down.

IBIO: Daily-scan pick; purchase failure.  I used the buy-limit price from my analysis program, but it wasn’t high enough.  Would have done well if I had caught it.

Daily scan: Buy JBHT on Monday.  It was a buy-candidate four times in the last three years.  One was a buy-failure and the other three were all small gainers.