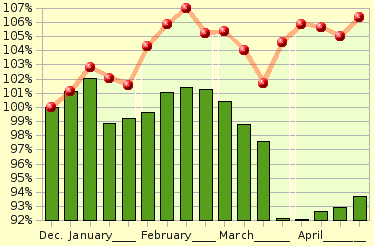 My account rose 0.8% this week, while SPY rose 1.3%.  Over the last month my account has risen 1.5% while SPY has risen 1.8%.  At this rate, I would be lucky to reach 106% for the year, which seems inadequate for the amount of effort expended.  Hopefully there are further improvements that can be made to the stock-picking program.

And… we have our first losers from the new program!  EK is the first weekly-scan loser and DUG the first loser from the daily-scan.

UDN: Finally went up enough to sell ¼, but even so the stop is still underwater.

IAU: One more week until my stop is above water!

DUG: Each day I raised the stop, but in the end it didn’t matter: DUG gapped down and grabbed the full 5% initial risk, same as if I hadn’t adjusted the stop at all.  Oh well.  DUG is a gainer only 50% of the time and this wasn’t one of those times.

QTM: Sold ¼ on Monday, which raised my effective stop to +2.8%.  Hopefully this is enough stop-height to ensure that I won’t end up with a loss no matter what QTM does next. 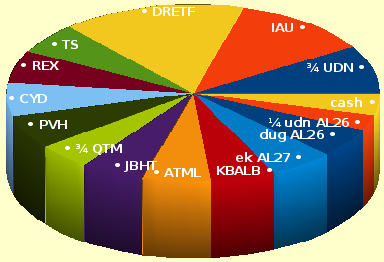 ATML: This showed up on a daily scan!  I’ve had my eye on ATML for two months, wondering when the next good entry point would be.  I’ve given it an 8% trailing stop.  It went up the first day, so the stop automatically went up as well.  Nice!  But really I should recode my analysis program to see whether trailing stops are a good idea and how deep they should be.

DRETF: This week's gain figures for DRETF (but not for the account as a whole) include +0.5% for the dividend that was declared Monday.  Record-date will be AL29 and pay-date MA15 but probably a few days later for this "foreign" stock.

KBALB: Why is it that almost everything drops the day I buy it?  Maybe my analysis program should be looking a little further back, buying things that were good candidates two days ago rather than yesterday.

New rule: Don’t buy stocks that are below their 200-day (40-week) moving average.  This would eliminate EK and DUG but none of the others.  REX and QTM both rose above their 200-day averages during the week before I bought them, while PVH had passed through that goalpost two weeks before purchase.

LRN: Buy-failure this week.  I held LRN for five days last month, gaining +0.8%.  When it showed up on the daily scan, I hoped for a repeat this month.  Oh well.

Weekly scan:  No pick this week.  I bought ATML instead.

Daily scan:  No pick for Monday, because there won’t be enough cash available until DUG and ¼UDN settle on Tuesday.