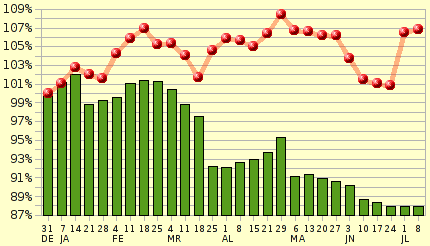 Ho hum.  This week, SPY rose by 0.4%, while my account once again did not move.  This is to be expected, if the market is tracing out the right shoulder of a head-and-shoulders formation (the left shoulder was February), except that the right shoulder is now too tall.  If the bearish argument is correct, the two-week rally is now over and SPY should start heading back down.

News: On Thursday, ADP said that they had seen in uptick in the number of paycheques they were printing for US companies, so the market gapped up.  On Friday, the government said that the number of new jobs for June was only ⅛ of what had been expected and so unemployment rose; the market gapped down but not as much as it had gone up on Thursday so I am not sure whether Thursday should be counted as an Island top.  Perhaps this entire year should be called a Broadening top.  For now, the market seems to be in a bullish mood, responding to minor good news more strongly than to major bad news.  However, volume is down by ⅓ from last week.  Many traders are sitting on cash, perhaps waiting for lower prices or a sign that the lower prices aren’t coming.

Politics: It is my belief that the government needs the stock market to be doing badly this month, in order to prove the Obama administration’s claim that lack of progress on the debt ceiling is “spooking the market”.  The US government has been manipulating the market heavily over the last two years and probably has some more tricks up its sleeve and a wilingness to use them.  Was ADP mistaken or did the government lie about unemployment in order to spook the market?  Was the whole point of the SPR oil release to make the market jump so it could then fall further without doing major damage?  I expect that the market will be falling from July 18th (Obama’s debt-ceiling deadline) until August 2nd (Bernanke’s debt-ceiling deadline) in order to create an ‼emergency‼ that the Republicans can use as political cover for the vote to raise taxes on the rich, a vote that they have known for months will soon be required of them.

The market was closed Monday for US Independence Day.  I did not buy or sell anything this week.

DRETF: Still on track for recovery.  Spent most of the week in positive-gain territory, but this includes past dividends. 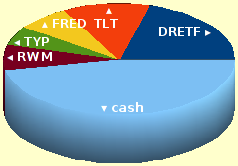 TLT: On Tuesday I recognized the dividend that had actually been payable the previous Friday.  The money arrived this Friday after the close.  There will be another dividend for August, so my minimum gain for August 20th will be -1.4%.

TYP: Spent the entire week below its loss floor, so every day I had to adjust my account balance upward to compensate.  This sort of thing is part of why Schwab says that leveraged-inverse ETFs are not suitable for any investor.
Next week, TYP has to go because its put is expiring.  Unless the market tanks, TYP will end up as a 9.3% loss.
Posted by Pyesetz the Dog at 7/09/2011 02:20:00 pm