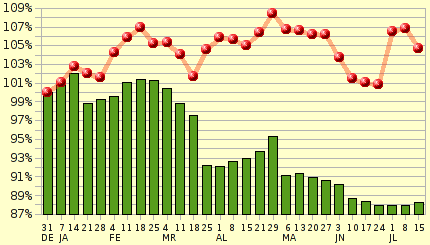 My account rose 0.4% this week, while SPY lost 2.0%.  Things are proceeding according to plan.  Really, 0.4% is a fine result for an average week (that would be 20%/yr), but it doesn’t look so hot after two weeks of no-change and six weeks of losses before that.

Politics: The debt-ceiling battle is proceeding as expected, so I predict a big drop in SPY next week.

DRETF: Still not quite recovered yet. 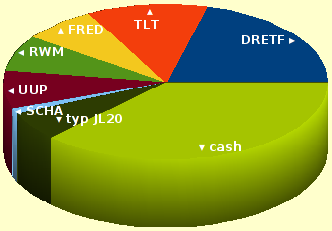 TLT: It’s taking a hit from the debt-ceiling scare.  Hopefully it will pop back up on August 2nd.  If not, I have the put.

TYP: Didn’t recover fast enough.  The put expired so I sold.  Probably would make money next week but I didn’t want that much risk.

RWM: Doing okay.  Has now mostly paid for its put.  Hopefully will go up a lot next week.

UUP: The US dollar seems to be at the bottom of its short-term oscillation.  I’ll probably hold this for a week or two.  This is a low risk/low reward trade.

SCHA: Preparing for the next upswing.  I had an order to buy when the market retraced 38% of its recent rise, which triggered.  I have more orders to buy at 50% and 63% retracements (the three usual retrace amounts).  Really, I don’t need a put on RWM, I just need small amounts of contrary investments.

SBB: To buy at Monday’s open.  I’m expecting a bloodbath on Wall St. next week, so I need more bearish stuff.