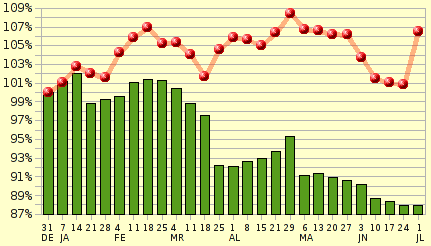 This week, SPY rose an amazing 5.6%, while my account did not move.  SPY is now back to where it was for most of May and also late February.  If it goes even 1% higher, the bearish argument will look ridiculous.  As it is, the bearish argument requires that everyone and their brother *not* pile into the stock market now because “hey, it’s going up!”  For SPY to rise this much and then fall again anytime soon is quite rare.  In October 2009, SPY rose 7% in two weeks, then fell 6% in the next two weeks—but then it started back upward and did not continue into bear territory.  The bearish argument, as explained by J.W. Jones, would require the market to pretty much sit where it is for the month of July, forming the right shoulder of a head-and-shoulders pattern, then plummet for several months after that.  My current investments are pretty much as described by Brigadier General (ret.) Joseph Shaefer, who always wants to invest by-the-book.  Well, the book isn’t working for General Shaefer this time!  I guess I need to buy some bullish investments as a hedge.

Hooray for puts!  The last time I went “bear” when the market decided to go “bull” was in late March.  I lost lots of money on stops that I have yet to make back.  This time, the puts minimized my loss without requiring that I sell the underlying shares, so there is still a chance that things could go my way again before the puts expire.

On Tuesday, I called Schwab to ask how to sell put-protected stock using conditional alerts.  The call-centre person told me to just use two alerts with the same conditions (one for the stock and one for the put) and trust Schwab’s computers to make the trades in the correct order.  This morning I found out that doesn’t work: my order to buy shares of RWM was triggered, then my order to buy a protective put for it was triggered, but was rejected because the purchase of the shares hadn’t completed yet.  Thankfully the price hadn’t moved much by the time I noticed and bought the put manually.  So I called Schwab again and was told that the only way to do this is to use a conditional alert with two legs (IF condition THEN buy this AND THEN buy that), which is only available using StreetSmart Edge, not StreetSmart.com.  Unfortunately, StreetSmart Edge is Windows-only and expects a modern computer with 4 GB of main RAM, ½ GB of video RAM, etc.  It won’t install under Crossover and I can no longer install anything (such as Virtualbox or KVM) from the Ubuntu repository because my “Intrepid Ibex” distro is three years old and no longer supported.  So I rebooted into Windows XP.  Edge complains that my computer is too old but mostly works anyway, with occasional crashes and failures to save layout settings.  I only need to use it when editing conditional alerts, which doesn’t happen every day.

DRETF: On track for recovery.  Did not trade on Friday due to Canada Day.  The CAD/USD exchange rate went up, but Schwab says the USD price of this stock went down? 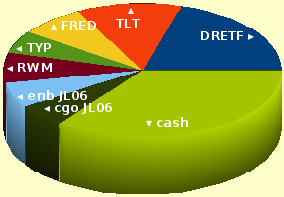 FRED: Bought put coverage for the last ¼ of the shares.  This improves my loss floor but requires that I use a double-leg conditional alert to sell that first quarter.  I am now protected in case FRED decides to swing back down to $12.75 one last time.

CGO: Since the market was so bullish, I decided not to sell CGO at Wednesday’s open as planned.  Instead, I gave it a trailing 0.6% stop (having found out how to do fractional trailing stops using StreetSmart.com).  This increased my gain by 0.3%.

ENB: It’s a miracle!  I actually ended up with a profit on this thing!  I used a 0.8% trailing stop, but it turned out I would have made 0.8% more gain if I had sold at Wednesday’s open as planned.  Of course, I would have made even more by keeping this until Friday, but there was no way to know that.  CGO and ENB were the first 20-day oscillator picks and both were profitable (barely).

TYP: Shouldn’t buy things in disgust.  Should’t buy put options that have only two weeks left.  Should have sold this as soon as Obama announced the release of oil from the SPR, which was a “black swan event” that ruined the bearish case for this purchase.  Ah well; live and learn.
On Tuesday, I bought put coverage for the other half of the shares.  This actually *lowered* my loss floor because the share-price had dropped a lot and so the puts had become expensive.  The advantage is that now the shares cannot stop out.  But there seems no way that the market will drop enough in the next two weeks to sell this at a profit, so I expect I’ll be exercising the option and taking my 9.4% loss.
Because this is a 3× leveraged inverse ETF, and the market is rising so rapidly, the prices of the puts are not going up fast enough to keep pace with the falling share price, so the daily gain figures are lower than the loss floor.  As far as Schwab’s “account balance” is concerned, I lost 0.3% overall for the week, but I adjusted that up to 0.0% because really the liquidation value of the shares-plus-puts can’t be less than the exercise price so my loss cannot be worse than 9.4%.

I’ve invented yet another algorithm for picking profitable stock trades!  Hopefully this one will make lots of money, unlike the previous ones.

According to my calculations (which are almost certainly wrong), this rule would have yielded 80% profit over the last 4 years—but much more in earlier years than later because volatility has been so low recently.

On Tuesday, I put in conditional orders to buy IWM and RWM at the calculated prices.  On Friday, the order for RWM was triggered.  I have no idea whether this is the top of the market; no one does.  But if it is near the top than I will win, and oftentimes the market does reverse itself soon after an 8% movement.