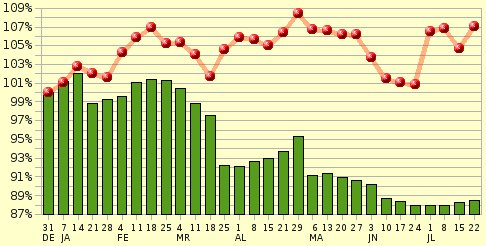 My account rose 0.2% this week, while SPY rose 2.2%.  Basically, DRETF did very well and counterbalanced my losses on everything else.  The chart at right looks very bullish to me; I am feeling overweighted on bearish investments now.  If the market does not do very badly on Monday or does do very well on Tuesday, perhaps I should sell some stuff on Wednesday to cut my exposure.

US politics: The debt-ceiling battle is now entering its final week before the artificial deadline, so I am expecting a lot of bearish disinformation to come out of Washington.  President Obama and Speaker Boehner are officially no longer talking to each other.

Euro politics: Germany and France have now decided to allow Greece to default on its debt.  This should be bearish for financial stocks, but I don’t know what it will do to the market as a whole.  Perhaps lots of money will move back from the USA to Europe, but perhaps not since both markets tend to move together.

Business news: This was the first week of the summer Earnings Season.  Many larger companies posted very good earnings, which will help the broad market to go up if it wants to.

DRETF: Recovery completed!  On Thursday the closing price for D.UN was exactly the same as it was on May 20th, just before they announced the new stock issue.  (This may have been manipulated.)  After Thursday’s close, they announced the purchase of another C$600 million worth of real estate, including some choice properties on Bay St. in Toronto.  To pay for that, they will be selling other properties rather than issuing new stock.  Clearly, this is a company that realizes when the market for its stock is saturated!  I should buy more, but I’m feeling overweighted on DRETF as it is.

TLT: Not going anywhere.  Outlook for next week is negative due to the deficit battle.

FRED: Not going anywhere.  I have orders to buy at a lower price and sell at a higher price, but neither one has triggered for weeks.  Soon I shall have to decide whether to renew my put or walk away.

RWM: Not looking good, but I can give it a few more weeks.

UUP: The US dollar went down instead of up!  Hopefully Thursday’s big move was the short-term bottom.  I should sell this on its next upswing, which might yield 1% profit.

SCHA: Bought more on Monday because it was a 50% retracement of the recent run-up.  This might turn out to have been the bottom of the downswing.

SBB: The “bloodbath” didn’t happen.  Had to lower my stop on Tuesday.  Sell next Wednesday unless it starts going someplace.

WSH: This is a 20-day oscillator pick for Friday.  They just settled a foreign-bribery case in which they admitted guilt.  Buy on Monday?

RPRX: Recommended by Tom Carreno, who predicts that its price will double by October.  Looks like I can buy it for $6.18, which would be a 38% retrace.  Stop at $5.57, which is resistance-turned-support from last month, for a max loss of 11%.  Or buy the November put and sell in September if it doesn't go anywhere, which would also be around 10% loss but without the nasty downspike risk that stops have.